Deprecated: Return type of Requests_Cookie_Jar::offsetExists($key) should either be compatible with ArrayAccess::offsetExists(mixed $offset): bool, or the #[\ReturnTypeWillChange] attribute should be used to temporarily suppress the notice in /home/ehowell/circlecityzymurgy.com/wp-includes/Requests/Cookie/Jar.php on line 63

Deprecated: Return type of Requests_Cookie_Jar::offsetGet($key) should either be compatible with ArrayAccess::offsetGet(mixed $offset): mixed, or the #[\ReturnTypeWillChange] attribute should be used to temporarily suppress the notice in /home/ehowell/circlecityzymurgy.com/wp-includes/Requests/Cookie/Jar.php on line 73

Deprecated: Return type of Requests_Cookie_Jar::offsetSet($key, $value) should either be compatible with ArrayAccess::offsetSet(mixed $offset, mixed $value): void, or the #[\ReturnTypeWillChange] attribute should be used to temporarily suppress the notice in /home/ehowell/circlecityzymurgy.com/wp-includes/Requests/Cookie/Jar.php on line 89

Deprecated: Return type of Requests_Cookie_Jar::offsetUnset($key) should either be compatible with ArrayAccess::offsetUnset(mixed $offset): void, or the #[\ReturnTypeWillChange] attribute should be used to temporarily suppress the notice in /home/ehowell/circlecityzymurgy.com/wp-includes/Requests/Cookie/Jar.php on line 102

Deprecated: Return type of Requests_Cookie_Jar::getIterator() should either be compatible with IteratorAggregate::getIterator(): Traversable, or the #[\ReturnTypeWillChange] attribute should be used to temporarily suppress the notice in /home/ehowell/circlecityzymurgy.com/wp-includes/Requests/Cookie/Jar.php on line 111

Deprecated: Return type of Requests_Utility_CaseInsensitiveDictionary::offsetExists($key) should either be compatible with ArrayAccess::offsetExists(mixed $offset): bool, or the #[\ReturnTypeWillChange] attribute should be used to temporarily suppress the notice in /home/ehowell/circlecityzymurgy.com/wp-includes/Requests/Utility/CaseInsensitiveDictionary.php on line 40

Deprecated: Return type of Requests_Utility_CaseInsensitiveDictionary::offsetSet($key, $value) should either be compatible with ArrayAccess::offsetSet(mixed $offset, mixed $value): void, or the #[\ReturnTypeWillChange] attribute should be used to temporarily suppress the notice in /home/ehowell/circlecityzymurgy.com/wp-includes/Requests/Utility/CaseInsensitiveDictionary.php on line 68

Deprecated: Return type of Requests_Utility_CaseInsensitiveDictionary::offsetUnset($key) should either be compatible with ArrayAccess::offsetUnset(mixed $offset): void, or the #[\ReturnTypeWillChange] attribute should be used to temporarily suppress the notice in /home/ehowell/circlecityzymurgy.com/wp-includes/Requests/Utility/CaseInsensitiveDictionary.php on line 82

Deprecated: Return type of Requests_Utility_CaseInsensitiveDictionary::getIterator() should either be compatible with IteratorAggregate::getIterator(): Traversable, or the #[\ReturnTypeWillChange] attribute should be used to temporarily suppress the notice in /home/ehowell/circlecityzymurgy.com/wp-includes/Requests/Utility/CaseInsensitiveDictionary.php on line 91
 homebrew club
Skip to content

What a great day! Yesterday Circle City Zymurgy had the pleasure of joining Taxman Brewing in Bargersville for a wort share. We took the base wort for Exemption, Taxman’s Belgian Tripel, and made it our own. Altogether we had 12 homebrewers join in on the wort share in the parking lot of the brewery. In April, we will sample the different beers and choose the top six. The six winners get free tickets to Taxman’s Death and Taxes on April 21st and get to pour their beer there!

The base wort for Exemption was a great pick as it allowed us to make it into almost anything. We could choose to add extra grains, we chose our own hops, yeast, and other ingredients. A few of us chose to stick with a Belgian Tripel, some adding special/secret ingredients to make it different. We also have a black IPA, a milkshake IPA, maibock, and other styles in the making so you can really see the creativity we get from some of our homebrewers!

Most of us showed up a bit before 10:00 AM and we all had our beer into our fermenters and started cleaning up by around 2:00 PM. As you could imagine, we discussed what we were making, the Taxman beers we had throughout the day, and what we were going to do with our beer throughout the next few weeks.

Once everyone got their equipment stored away, Colin and David walked us through the brewery. We saw a room full of a ton of “clean” beers aging in different liquor and wine barrels and a room full of sour beers also aging in barrels. We went to another building where the grainmill, brew kettle, HLT, mash tun, brite tanks, and fermenters were stored. Colin allowed us to walk up the stairs and check out the main brewing area to look at the tanks and walked us by all of the huge fermenters.

After the tour, some of us finished up by going to the taproom and sampling some more Taxman beers and got some much needed food after our brew day! The Red Wine Barrel Aged Qualified and wilf-fermented Certified were definitely a big hit among the club. A lot of us had the Barnyard Burger which had a slice of pork belly and over-easy egg on top of the burger. Delicious!

Circle City Zymurgy wishes to thank Taxman brewing and all others involved in making this happen. We had a great time!

Man, what a day! Circle City Zymurgy had a great time at Union Jack’s Pumpkin, Cider, and Fall Beer Festival. The event was completely sold out and had about 650 attendees. There were around 40 different vendors pouring delicious beverages with a total of 76 different, unique beers being poured. 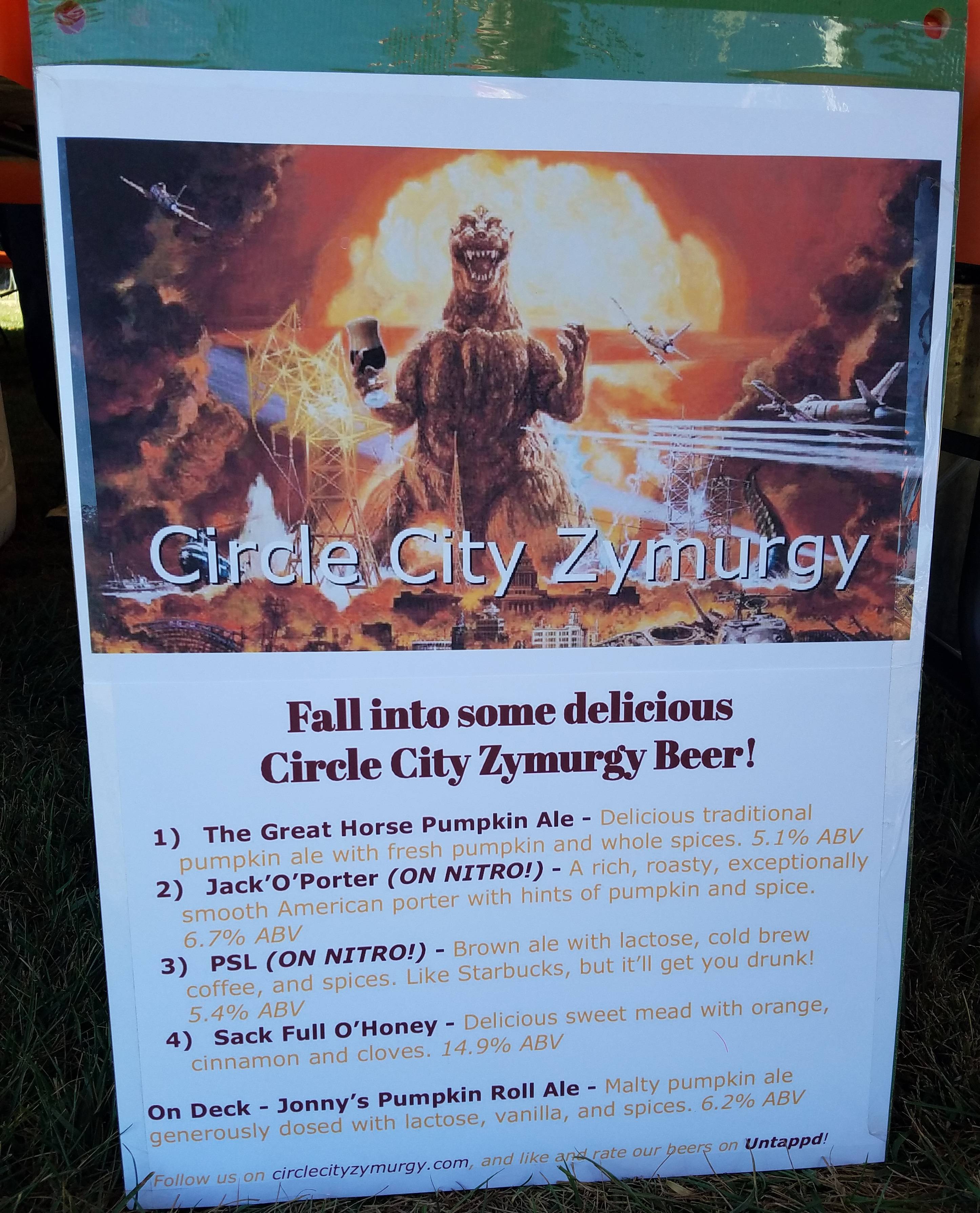 CCZ had a great presence at the festival. Along with myself, other attending members were Steve Kent, Wes Martin, Jeremiah Tyson, and Allen Brown. We brought 5 kegs of homebrew. Wes brought his “Great Horse Pumpkin Ale”, Jeremiah his “Jack ‘O’  Porter (served on nitro), Steve brought his PSL – also on nitro, Allen had his near 15% mead, and we had Jonathan Marting’s Pumpkin Roll Ale. 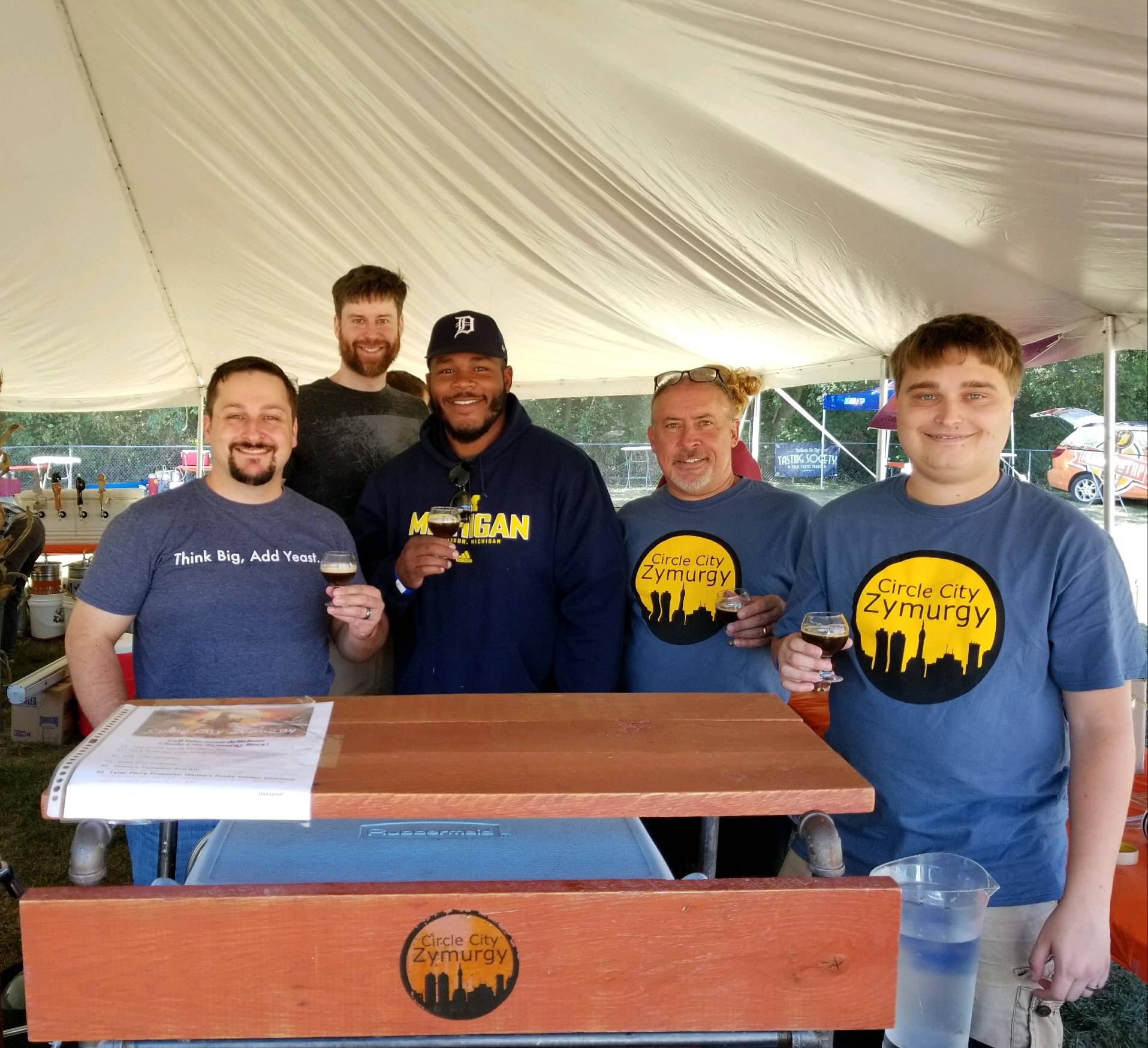 In the end, we poured a total of 25 gallons of homebrew. Everyone that came up for a taste wanted to try something different and I believe we had a great variety for everyone to have something to enjoy  (I’m pretty confident in saying that based on the constant line we had!)

There were a total of 9 homebrewers that attended and we were all right next to each other. As you could imagine, we had great conversations discussing the hobby we love. This year, Union Jack also held a homebrew competition with the winner receiving a $100 gift card to Union Jack. A big congratulations is in order for our member Jeremiah for getting 2nd place for his Jack ‘O’ Porter! 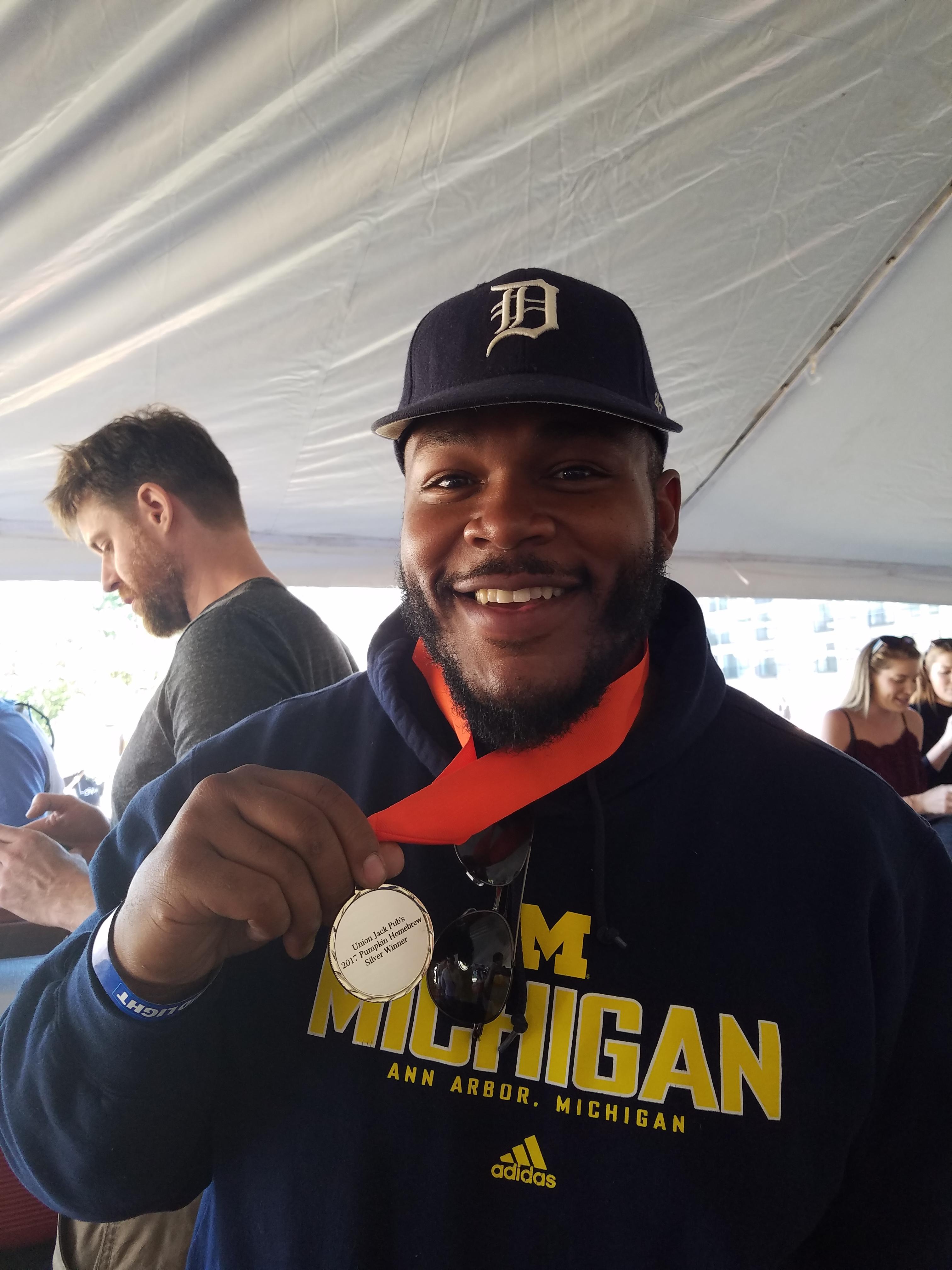 The festival itself was a great time. We really could not have asked for a better day. The weather was perfect and really gave an exact feeling of what Fall is all about. As soon as you walked in you were given a choice of two neat glasses that you get your beer poured into. The festival had plenty of great food to keep you going during your beer trek. A few vendors such as Indiana on Tap were there as well supporting the hobby and offering free or discounted offers.

Elysian Brewing, based out of Seattle, Washington, had a great presence as well. They had their own little area where 6+ of their beers were served. Each of theirs had its own unique style and taste as well. With a big name like Elysian, I definitely had to try them all.

In conclusion, this was a very prosperous event for Circle City Zymurgy. I heard multiple attendees surprised that our beer was homebrewed, expecting it to be made at a professional brewery. I also had a few people walk up to me after seeing my shirt and asking where our beer could be purchased. You can’t get a much better compliment than that. This will definitely have to be an annual event for CCZ! 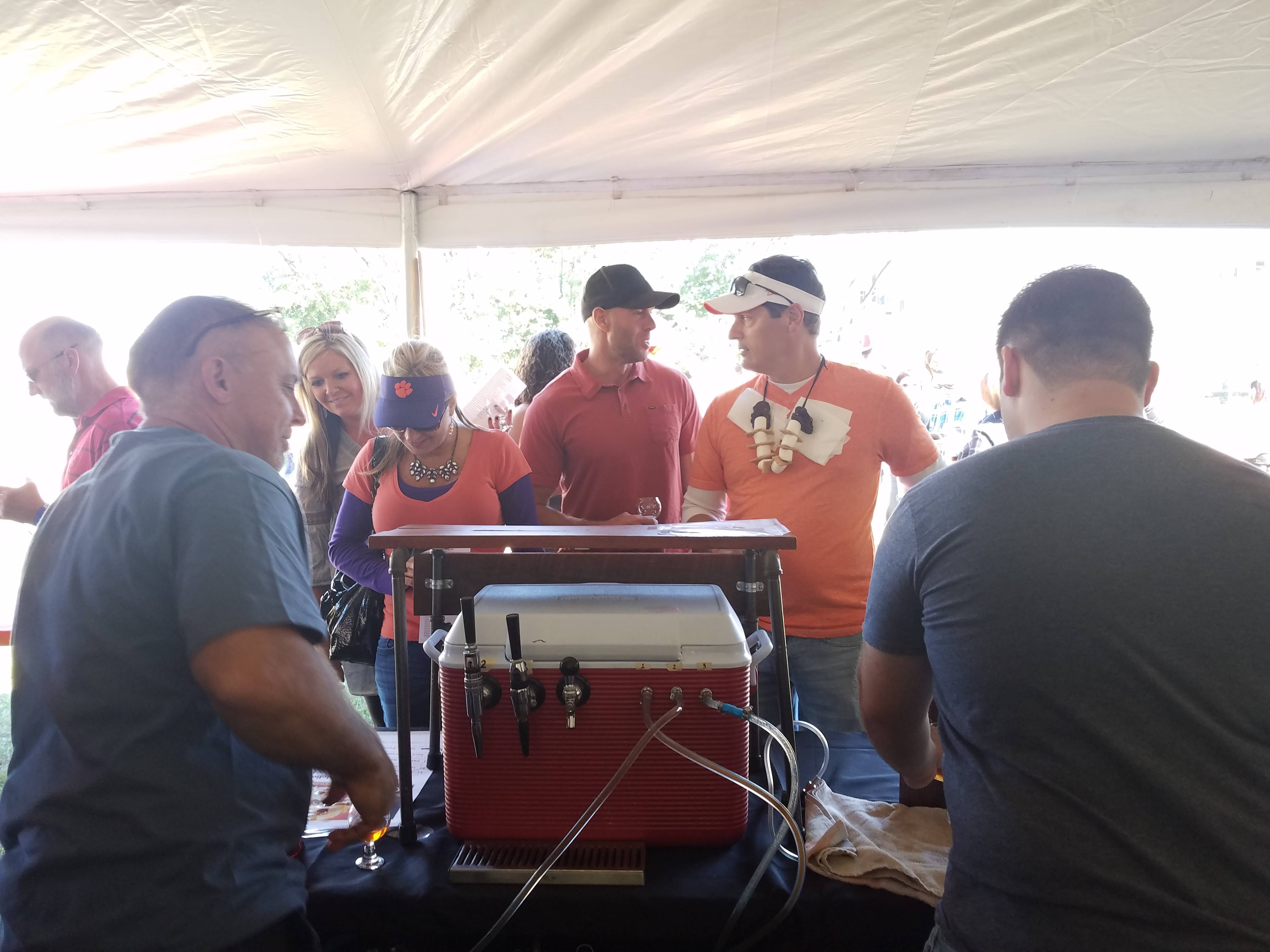 Our first official meeting kicks off on April 2nd at the Upland Tasting Room on 49th and College. This is a great opportunity to find out more about what CCZ is, hear about our upcoming events, and how to get involved with our club. The event is open to all, and should be a great time. We will also be discussing membership to the club at this event, so if you are interested in joining please come out!

After we “give you the business,” we will decamp to Erik Howell’s apartment upstairs from the tasting room to have a party/bottle share to commemorate the day.

Thanks for visiting the Circle City Zymurgy homepage! We are planning some great events this year. Stay tuned!

Like all great revolutions, Circle City Zymurgy began in a tavern. It was there over beers on a cold winter night that members of two different homebrew clubs decided to combine forces and take over the homebrewing world… Just kidding. All we want to do is make a homebrew club that is fun, social, charitable, educational, and inclusive. We strive to be an important part of both the homebrewing and local brewing communities. This is why we try to participate in as many local events and festivals as possible (you may have seen us at History on Tap, the Phoenix Theatre’s Brew Ha Ha, Upland’s Sour+Wild+Funk Fest, and Death and Taxes!), we have partnered with local breweries to serve our beer, and we host various fundraisers and champion charitable causes.

We hold monthly meetings on Wednesday at 7:30 PM. We always alternate meetings: one month we will meet at a local brewery, and the next month we have bottle shares and educational events at both Great Fermentations locations. We encourage you to check out our events page to see where the next meeting is going to be.

We want to work together as a team to accomplish great things! What can you expect from CCZ? Whatever you put into it. We want to create fun events that inspire you to create, taste, and learn about all things fermented. We were founded in February of 2016, and plan on sticking around for a while. If you’d like to be a part of the Circle City Zymurgy club, contact us at circlecityzymurgy@gmail.com.